A Review of Get Out by Jordan Peele 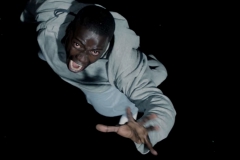 In the poem cumsong Strange Fruit, made famous by Billie Holiday, Nina Simone and many other arrays of important and prominent United States of American artists, the lines sing of black bodies hanging from trees; a widespread lynching of African Americans by white supremacists in the USA at the wake of the slavery era in the early nineteenth century.

“Here is a fruit for the crows to pluck”, the song goes, “for the rain to gather, for the wind to suck, for the sun to rot, for the leaves to drop, here is strange and bitter crop.”

It’s been several decades after those powerful words first written by Abel Meeropol to protest racism in the USA. Although these fruits don’t get forcefully planted on trees anymore, strange things still happen on the streets of America. Get Out opens with a scene of one such barbarity.

A black man walks in a street at night. He could be Emmett Till, Amadou Diallo, Alton Sterlin, Eric Garner, Tarmir Rice, Calvon Reid, Malcolm Ferguson, Ronald Beasley or even the recently murdered Jordan Edwards; he could be any of those names that have, over the years, made a compendium of America’s inhumanity against her African American citizens; he could even be someone still breathing, someone for the next page.

A car crawls up on the man; he knows he should be scared like every black American out there walking the face of their country. He turns around to get out of trouble “Not today; not me”, he says. He turns again and then again until he has nowhere to turn. Someone comes out of the car and, like a cat on a mouse, pounce on him, kills him and drags him away.

But all that will soon be a thing of the past, Jordan Peele, the director, seems to say in this debut epic project of futurism; Black bodies will be “in fashion” and gets to be most sought after.

Chris, played by the talented Daniel Kaluuya, is visiting his girlfriend’s parents for the weekend. Chris is a young black photographer dating Rose (Allison Williams), a white affluent girl. From the very start of his preparations for the journey, he gets signs that should spell what horror awaits him: He cuts himself sharply while shaving, and on the way, a deer crosses their car and gets killed.—Of course, these could be coincidences, but Peele, a fatalist, was getting at something with the suspense, an attentive viewer would sense this.

The deer reminds Chris of a hunting memory of his mother, who had died from injuries suffered from a hit-and-run when he was a kid.

They arrive at their destination. Rose’s parents Dean (Bradley Whitford) and Missy (Catherine Keener) are white liberals just as Rose had convinced Chris to believe before the trip, and they don’t mind their daughter’s choice of bringing a black man home. Until the scheme to hypnotize Chris and carry out a bizarre surgery that would leave him with an old white man’s mind starts to unfold, things were as expected: The family seems a regular one.

With time however, Chris’ bewilderment on the black housekeeper Georgina (Betty Gabriel) and the gardener Walter (Marcus Henderson), who both behave strangely as black Americans, would get aggravated when he meets Logan King, another African American visiting the family on a get-together among all-white family friends.

“It’s not what he says, it’s how he says it”, Chris tells Rose of Logan after their brief meeting.

You can plant a dead man on a tree—as we’ve seen done in history—, but how do you pluck a living man from a tree, from his root? How do you take over a man and upturn centuries’ old culture and tradition? How do you pluck his body and soul in one night? This film tries to paint the horrific picture of how this can be done.

Chris gets hypnotized easily on his first night because of his very emotional past: his helplessness during the time his mother died, a story he had told Missy. But the denouement in the film is when Chris is tied up in a chair to face a television, which shows clips to prepare his mind for the surgical. At that moment, he starts to fight back.

There are two ways to see the film: One, strictly theme it around racism in the United States as we know it today and come quickly to the mainstream conclusion, or, two: See it as a work of futurism, an exceptional experimental project that isn’t blindly so. I see it much as the later.

The modern human will want to defeat death. In the coming decades this’ll be the ultimate goal of his existence. And in achieving this, he’ll fall in and out of modern myths.