Blue is the colour of love

BLUE IS THE COLOUR OF LOVE

A Review of Barry Jenkins Moonlight

Barry Jenkins critically acclaimed film, Moonlight is adapted from a drama piece –“In Moonlight Black Boys Look Blue” – by Tarell Alvin McCraney. The film, structured in three parts, is the second feature by the filmmaker (“Medicine for Melancholy” being his debut). Moonlight is the growing-up story of a black boy in a black community in Miami, Florida. The parts are titled in the names he’s given at different stages of his life – Little, Chiron, Black. 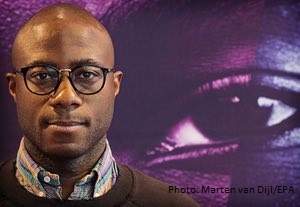 Little Played by Alex Hibbert, our title character, resolves after-school encounters with boys his age by running away to avoid taking a beating. This is how Juan (Mahersha la Ali) finds him, hiding in a dark room of an abandoned building project. Thereafter, a seeming rummy relationship develops between the two. Little – he earns this nickname from his size – builds a wall around himself as protection,  from peer victimization, parental abuse, and, perhaps, societal neglect. It takes two sumptuous meals to crack this wall. “My name is Chiron” he ventures, in the middle of the second, served him by Juan’s beautiful girlfriend, Teresa (Jannelle Monae). “People call me Little.” The voice, buried in little Little’s stomach, is manly, and his look, piercing – perhaps, this is what evokes Juan’s curiosity. 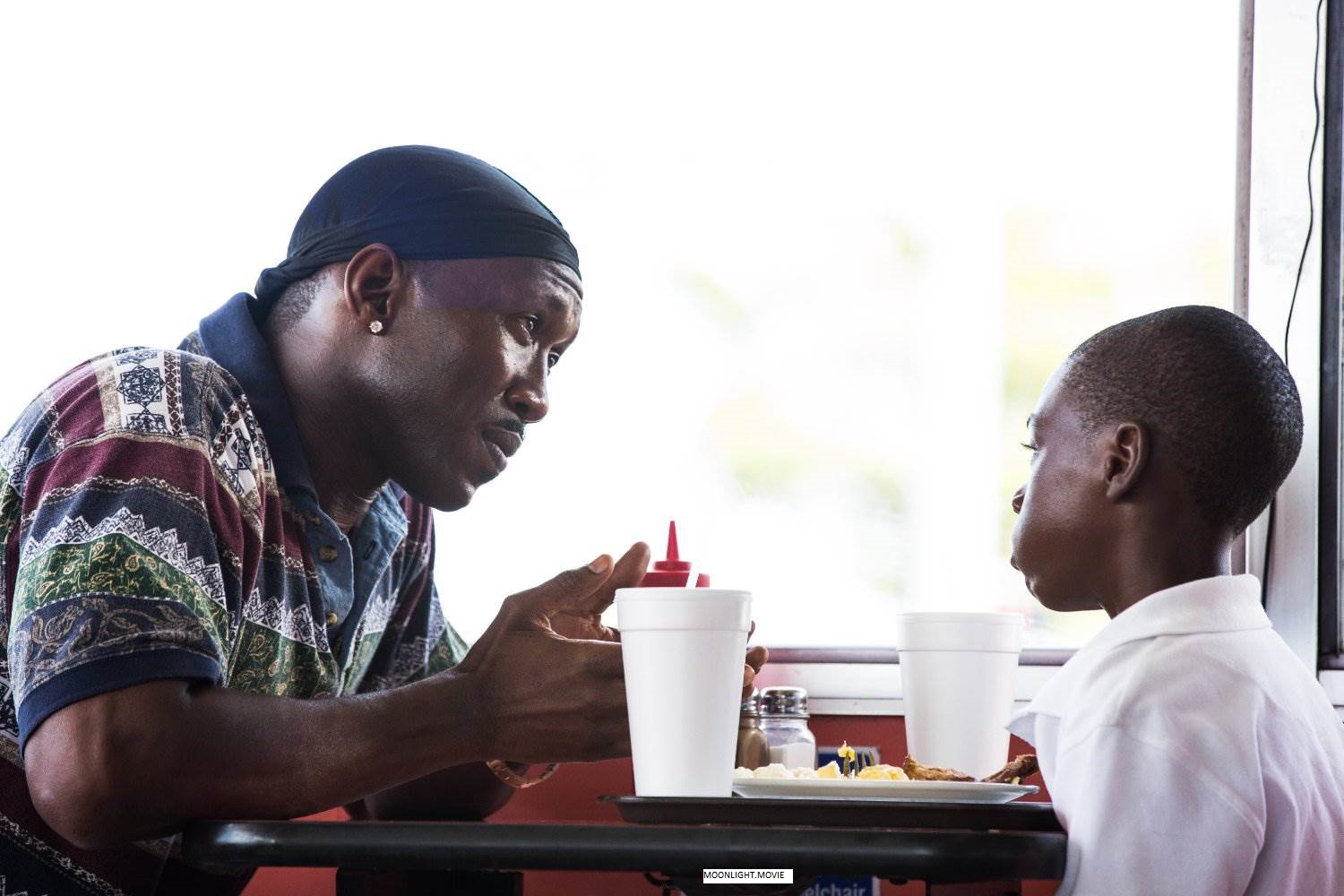 Chiron  Chiron (Ashton Sanders) is now a teenager and all his earlier challenges as a boy take more defined forms. Chiron’s mother is now a chronic drug addict, and his victimizers have grown even stronger and threatening. The question of Chiron’s queer sexuality deepens. The result is a delirious and deranged ego. To what extent is this a result of family/societal dysfunction?

Although Juan’s home, even with him not present at this moment in Chiron’s life, is still open to Chiron, a safe haven, one wonders how he would have dealt with Chiron at this moment in his life. This stage, of self-discovery, Chiron finds particularly difficult to deal with. Cornered, finally, while nursing his wounds from the brutality of his peers one sunny afternoon, he is urged by the school proprietress (who calls him ‘boy’) to press charges. “I’m not ‘boy’!” Chiron retorts. She then asks if he’s a man. He cannot call himself ‘man’ either. “You don’t even know what this is”, he cries. It is this question, of identity and where to fall, at this point, that hems Chiron.

If Barry Jenkins had intended romance or love, this film would easily be tagged ‘pretty’ – if not sexy – like Akin Omotoso’s Tell Me Sweet Something. But the theme is a difficult one. The journey is rough and brutal. Still, the pictures delight the eyes; the whirling movement of the cameras and the close shots on faces; the music; the blue of the sea and landscapes. One need not be an expert face-reader to fully appreciate the ingenuity of the filmmakers, as a lot is said in this film by the face. From when he was known as Little, Chiron has a look, one he would use to wade his path later in future. So that, launched into a deep vacuum of the self after he discovers his sexual preference.

Chiron navigates this journey through the language of the eyes. As is the case with narratives of young black males in poor, black, drug-infested communities in America, Chiron goes to prison – but not for drugs. He, at last, conquers his fear of his tormentors and carries out a long overdue revenge on the ringleader. With his face still in stitches from brutal attacks, Chiron storms his school one afternoon, burst into his classroom, picks a chair and wallops his oppressor from behind, striking the bully unconscious. He goes to prison and becomes Black. 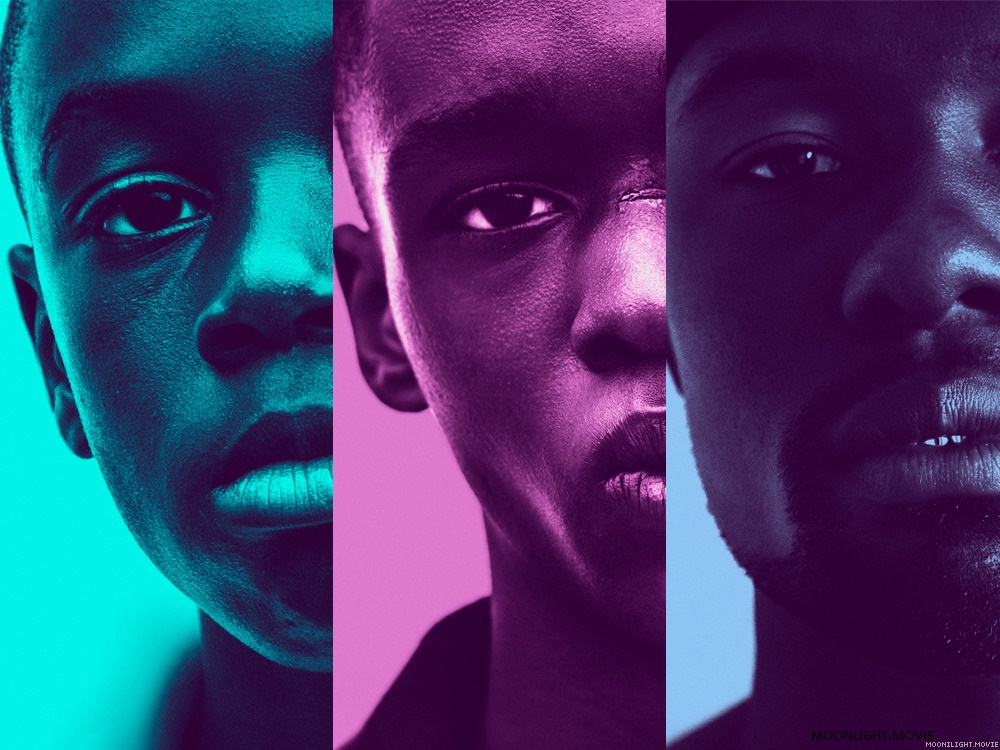 Black In his new persona, Black (Trevante Rhodes), named as if to chronicle the young black male experience in America, Chiron has been transformed in every sense of the word. “I pick myself up,” he says after meeting his friend and lover again. His posture embodies total confidence. This is a Chiron now comfortable in his body and whose ideas about life are grounded in him; in well-built muscles and seemingly calm but dangerous outlook. Perhaps, only an experience in prison; or a successful fight back from delusion, would make such transformation possible. This new Chiron calls to mind Curtis Jackson in Get Rich Or Die Trying – Is this a bold statement for black Americans in the present United States? The closing shot shows Chiron against the sea – blue in the moonlight. Beyond its beauty, this shot seems symbolic: what fate lies ahead for many like him? Moonlight is insightful, colourful, important and urgent.