A review of ‘Bad Market’ by Paul Gaius 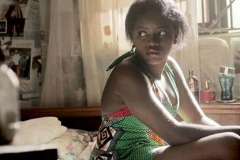 In the novel Easy Motion Tourist by Leye Adenle, the protagonist, a Brit, who comes to Nigeria for a short-term assignment as a journalist, busts a syndicate: an underground network of sex workers and supposed ritual killers in Nigeria. Of course, he knows beforehand what prostitution is,—it is the oldest profession in human history and the highest profiting business in the world regardless its illegitimacy in most societies, including Nigeria—what isn’t known to him, however, is how it works in different localities and what excesses come with it. In the novel, one thing is indisputably true: the originality of cast and the vivid depiction of scenes— qualities fast becoming obsolete in the rendering of art in this sphere. Bad Market is a product of such unconventionality.

Paul Gaius’s Bad Market opens in a motion, a Volkswagen—the Golf model, a vehicle usually praised for its ruggedness in Nigeria, plies an equally rugged terrain in a typical Nigerian suburb: hundreds of blind windows, looping wires on electric poles, and scanty greenery, lay in the background. It’s early in the morning somewhere outside Lagos. There’s a sound of a church bell banging to the count of six. The car navigates its way through the muddy street. Here, the director displays his understanding and the willingness to relate to the real Nigerian experience: Life is rough out here, and it’s about to get even rougher for someone.

The protagonist, Eno, played by Oluwanfunbi Adesolanke, is animated product (wouldn’t even qualify as a victim yet). “See as I arrange you like better person.” Her supplier, Lovette, a local prostitute who is head of an organized sex trade, says. She is satisfied to get another product set for profit. The driver of the car, who is a pimp—convincingly played by Sunny Chikezie—soon reaches them; takes Eno into the back seat like one would take a new product. She sits demurely there. For almost seven minutes into the twenty-eight-minute play, Eno remains what she actually is: A ‘Market’; but one who is intently absorbing the events around her and weighing the realities she beholds through the car window with her fate in the hands of her abductors. After enduring a chunk of the journey, she suddenly snaps from the psychic cage she must have been dumped in by Lovette: “Where we dey go?” she asks the driver. There is no human trafficking that doesn’t come first with physiological abuse, and this explains Eno’s solemnity throughout the film.

The scene where Eno tries an escape can’t be more real. Both actors—Eno and the driver—must have left the scene with different degrees of bruises—I felt a hitch under my skin when Eno fell. She isn’t successful with her plan to escape. She is recaptured and the journey to Lagos continues with all its unendearing factualness.

But the driver has a humane side to him; a soft spot quite rare in the seemingly jungle atmosphere the director painted. In a society where everyone looks out to cheat and take advantage of another, no one should care about another’s well-being that much, talk less of a ruthless pimp. Could the driver be one of the very rare exceptions? He continuously displays his emotions with Eno, and Eno, in turn, finds in it a route to escape each time. He would even advise Eno and give her a sort of motivational talk when they get to Lagos. “Sometimes, where life dey carry us dey go we go follow.” But as a pimp that he is, does he know any better?

Eno would eventually escape after a severe assault meted out to her by her proposed client; she would escape and it would be through the loophole of the driver’s brotherly affection for her. But did she escape the ultimate tormentor: the ills of this society leveled on us all like a heavy cross: the economic forces turning young Africans against their wills? Gaius seems to ask in a sudden twist of the story in the last scene.