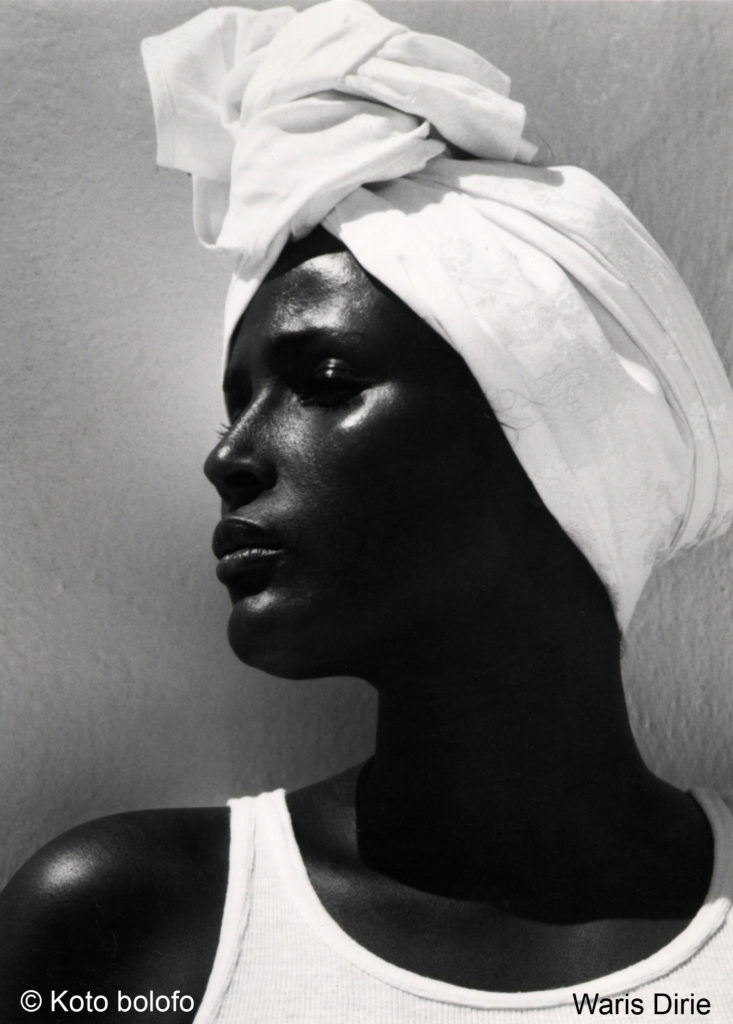 The cover photography speaks volume: bust shot of a Black woman, contrasting her snow-white head-scarf and blouse to her deliberately-emphasized blackness. It is a shot of Waris Dirie on the front cover of the autobiographical novel Desert Flower (seemingly co-authored with Cathleen Miller). This book has now been made into a film, screened two Thursdays ago at The Palms. We will deal with book and film together.

But, first, what does the profile bust speak of? The contrast of Blackness and Whiteness was intended, it seems, to make flesh White fantasy of uniting the powerful myths of Hottentot and Venus. The whiteness (Venus) is invocative of a cultural tradition of lust and love; the Blackness (“Hottentot”) of all that is savage and primitive sexually. The photograph seems to configure Black female beauty and sexuality as savage, primitive and in need of White civilization.

Waris’ narrative begins almost fictionally; a desert encounter with a lion, an attempted rape–which she successfully beat off. Even the face-to-face encounter with the lion was almost a sexual encounter, an attempted rape. “I’m ready for you. Go on. Take me now,” she said as the lion, “a beautiful male […] paced back and forth in front of me, sexily, elegantly.” Finally, she is rejected by the lion. What helps make this reversed beauty and the beast encounter is the almost pornographic tone–pornographic in the sense of a pre-seduced female body waiting to be ravished by beastly male passion.

The reason for Waris’ nightmarish encounters is because she is running away from home. Her father had found her a husband–one at least sixty years, with a long white beard. She is just thirteen. In the early hours of the morning, Waris bids her mother farewell and runs into the glorious desert dawn on her way to Mogadishu to find her big sister, Aman, who opened the trail for Waris for the same reasons too. She does find her sister, and some other uncles and aunts but ends up, not in the Somali capital but in London as a servant to the Somali ambassador who is married to her mother’s sister. And this is how Malcolm Fairchild finds her. He will follow her for over two years before he gets to photograph her. It is that picture, a profile shot of her face that sets her on course, to be “discovered” by Terrence Donovan.

Another top African model, Katoucha had written in her autobiographical novel In My Flesh; “I embodied the most arrogant and admired kind of femininity, I who was supposed to be diminished,” she said. “I am persuaded that this blow to my dignity and my body was the founding element of a fracture in me that turned into a ravine.” This fracture that became a ravine was masked by the admired arrogance of the catwalk. “You walk out on the runway,” Waris writes, “and the lights are blazing, and the music’s blasting and everybody’s staring, and you’re sashaying down the walk for all you’re worth, thinking, I AM IT. ALL OF YOU–LOOK AT ME! But then Waris whose dignity received the same blow as Katoucha’s, reveals her fractured self to Italian Marie Claire. Her account is the most disturbing passage in the whole book.

“The next thing I felt was my flesh, my genitals, being cut away. I heard the sound of the dull blade sawing back and forth through my skin.” Mercifully, the child of five passes out. When she comes to the gypsy woman is puncturing her flesh with thorns to pass a strong white thread, sewing her up, leaving just a tiny hole for urine and that time of the month. Waris herself could be as crude as the gypsy woman, sawing through our sensitivity with a rusted blood-encrusted blade. She speaks of the rock, the operating table as being “drenched with blood as if an animal had been slaughtered there. Pieces of my meat, my sex, lay on top, drying undisturbed in the sun.” Weeks later they are gone–“no doubt eaten by a vulture or hyena.” It will be years, in London, before Waris gets an operation. But the harm is already done.

Waris Dirie’s book does not cohere. There’s an absence of wholeness to it, an absence of direction. It does possess some truly disturbing and powerful moments. Here and there she finds the tone to tell her story, and all too often losses it. Quickly the pain, the conflict is thrown away. And what peeks through is a Cinderella story. Still, I find the book much better than the film.

Guinean filmmaker, Mama Keita lamented the European conception of ‘African Cinema.’ “An African film has to include shots of a goat crossing a field, a woman grinding corn, a child dressed in tatters, and a man walking off to a field with a hoe over his shoulder.” In this regard, Sherry Hormann’s film of Waris Dirie’s Desert Flower does not disappoint. Except that alongside shots of sheep, include shots of Waris cradling a lamb, is added shots of camels crossing the desert. The director considers this shot important enough to open the film.

Quickly, the narrative shifts gear, from Cinema Calabash to Cinderella Story. Typically, in the hands of this European person, the fairy-tale of a Black person turns into a sheer mockery. “Were the story not true,” Hormann says, “I would have thought I was reading a modern version of Cinderella.” The portrayal of Waris panders to the European conception of Africans, really Blacks, as clumsy, overgrown children, laughter-evoking Steppin Fetchits. This is really the flip side of the coin to the savage, barbaric blacks.

African stories are mostly never told by Africans themselves. All too often African personalities become secondary characters in a story that is supposed to be about them. It happened to Biko, to Mandela, it happened to Idi Amin in The Last King of Scotland, it will happen to Chimamanda’s Half of a Yellow Sun. The same thing happens here. For some strange reason, Marilyn, the Black girl whose passport Waris used to exit and re-enter London during a Bond film shoot becomes white and given a more prominent role. “British independent star Sally Hawkins is so right for the role of Marilyn,” the filmmakers say,” she’s so perfect in embodying a hyperactive yet sensitive young woman who succeeds in trumping the travails of day-to-day survival that it’s difficult to imagine that she isn’t like that in real life.” There is something like dramatic license, but is it applicable in all latitudes and longitudes? Fiction, Achebe argues can be false and it can be true.

The makers of this film say it is a cross between a fairy-tale and a political plea. Agreed, one must not judge a work of art by what it did not set out to do. But then we must judge it by what it sets out to do. Both novel and film do not set for themselves the task of uncovering the mechanisms of the lucrative international trade of hundreds of young African women with their heads full of dreams, fairy-tale, ready for tremendous sacrifices to become the new African top model; these girls who are victims of a genuine traffic, and black female sexual commodification in which cultural otherness is varnished with the label of haute couture.

Fashion magazines are replete with images of the commodification of the exotic. I have in mind a particular nude cover shot of Waris entitled Neo Primitivo. This exoticism goes back a long ways. It goes back to the era of Colonial Exhibitions, specifically to the Hottentot Venus. The Colonial Exhibitions were those freak shows in which cultural “others” were displayed in a public performance of their “cultural otherness” for an Anglo-American and European audience. In the early 19th century a South African tribeswoman was taken overseas and exhibited naked as the Hottentot Venus. Under the guise of scientific and medical research (about black female sexuality) physicians probed her sexual organs, even after her death, Sara Baartman remained an object of imperialist scientific investigation, as her sexual organs and brain were displayed in the Musee de l’Homme in Paris until as recently as 1985.

Within hours of her death, the original Hottentot Venus was dissected by the eminent surgeon Georges Cuvier, who made a plaster cast of her body and labia in jars. One wonders if there are those who would like to still do this; pickle an FGM victim in formaldehyde. I realize too, that I have not really delved into the aesthetics of the film… It was clear to me from the beginning I was not going to concentrate on that not just for reasons of space, but also because it would deviate from the intended thrust. For this critique, my main worries are the subtleties that underpin much of European artistic and scientific works dealing with people of colour, and how these pseudo-science and art are mere fleshing out of deeper processes that are more or less conscious.