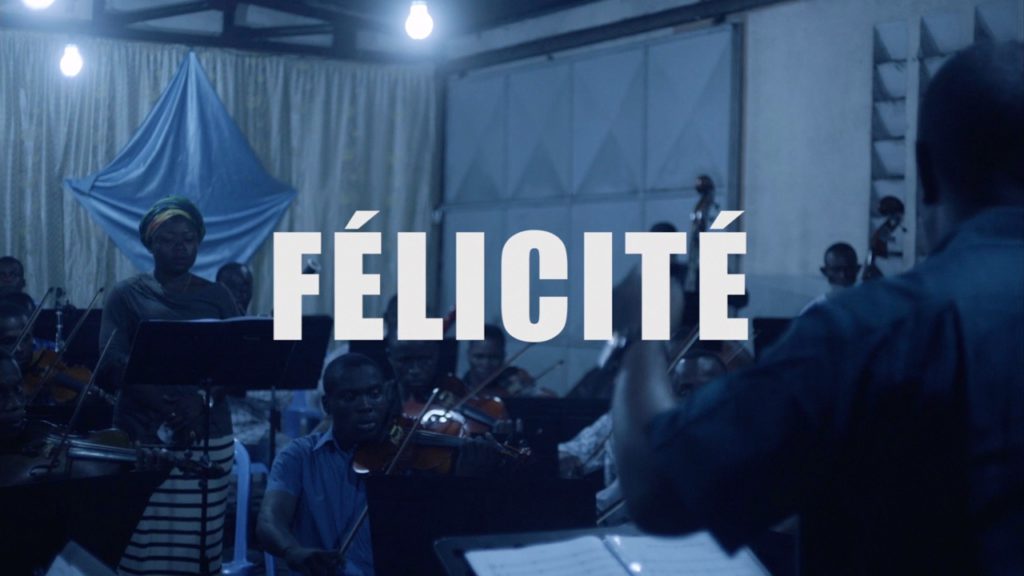 Félicité, by Alain Gomis, is too long and, for the most part, really quite boring. Between participating in screenings and conversations at Critics’ Week Berlin and German African Foundation, reediting digitized footage at Arsenal Film Institute, doing an archival presentation at Forum Expanded, and, in the windy streets of Berlin, repeatedly ducking into cafes for drinks – in order to confront the cold – I’d missed the festival screenings of this film. By the time I got to watch it, during post festival screening for workers of the Berlinale, Gomis’ film had won the Grand Jury Prize – and aclaim among a certain layer. There’s the danger, therefore, that this review would be viewed as diservice to African cinema.

The diservice,  however, is in the uncritical attitude of writers (and lovers) of African Cinema. At the risk of causing offense, I think what the late American critic,  Pauline Kael – I became a film critic because of this woman – said of the educated American film-goer holds true for the European promoter and lover of African films and filmmakers: they are, at heart, nothing but social workers. In the sense that they are, more-or-less consciously, condescending toward these films and filmmakers from “this fucked-up continent”. You wonder what wish-fulfilment lie at the heart of this self-congratulatory need for identification – is it a temporary escape from the tension and complexity of European middle-class existence? It’s, I think, safe to say that, the specific demands of this need, given the agency denied this European lover (who’s invariably female) of Africa, in her own society, requires a thematic approach to the continent’s cinema – a vicarious saviour of the impoverished lives on the screen. When, however, this person wants to enjoy film as film, as an artistic expression, she turns to films from America and Europe.

Gomis’ film beautifully embodies this self-congratulatory useless gesture – in the person of the title character. The film declares itself right from the start: a voyage into the heart of darkness. Felicite’s voice evokes deep forests, tangled undergrowth, dark, dangerous lakes and moonless African nights of blighted humanity. Her voice, stained by smoke and alcohol-tinged, broken by the bitterness and harshness of the years, seem unable to produce, at least while singing, articulate human sound, but, rather functions on the level of Conrad‘s natives. In much the same way, Makeba’s voice and music, in the context of the struggle against apartheid, seemed to symbolize Africa’s struggle, in this film, set almost deliberately in the country a European mind snapped in Conrad’s novel, Felicite’s almost inarticulate howl is the exact opposite of everything a European person is familiar with in European society – musical anarchy, the very expression of the primitive, savage sexual impulses that lurk in black biology. And these primitive urges are enacted before us, without love, without tenderness, in half-shadows, in this bar that evokes a jungle in the dead of night.

And, because, she seem representative of the African continent, Felicite’s voice becomes responsible for the bar’s sexual debauchery. Who are these bar patrons, these men and women whose lives reek of filth and decay? What has made them this way? For the most part, the women are portrayed as hags of Kinshasa nightlife and the men are stereotypical of the philandering, absentee black father squandering their earnings on booze and cheap women – the types who beg for sex. Felicité herself seem born the very day we had need of her: as prop to explore this landscape of horror. How did she get this way, what is she rebelling against? We are not encouraged to question if she has parents and what type of parents they are. We are simply told by her son’s father (who, scandalously, is untouched by his son’s tragic situation) that she “wanted to be a strong woman”. There is a troubling undertone to this sneering accusation. Felicité, as heartbreakingly fragile as singer-turned actress, Véro Tshanda Beya, plays her, is not the protagonist in her story.

The trouble is in Gomis’ juxtaposition of the singer’s bar performance and bar’s riotous denizens to the Kinshasa Symphony Orchestra‘s preparation and performance of Arvo Part’s My Heart is in the Highlands – the one sensual and spiritual, the other freakish and inhuman. You find it hard escaping the feeling, since there’s no narrative demand for the symphony orchestra’s performance, of Felicite and her Kasai Allstars as a foil to Part. In this sense. The frequent shots of the streets of Kinshasa are not establishment shots – the documentary nature of the shots make them character explorations. The streets and the bar, its music and drunken, lecherous brawlers are one: an image of Africa – symbolizing barbarism. The symphony orchestra, on the other hand represents Europe and civilization. This, therefore, is what I find troubling: that the boy’s father’s sneer, “you wanted to be a strong woman” conceal a political attitude – you wanted independence, now see what a fine state you’ve got yourself.

Gomis’ avoidance of meaning, motive, character, background is not innocent of political attitude. It would have demanded context – for the brutality, the poverty, a father’s callous indifference. Instead of context, we are presented with a pathologising of (black) African humanity in a forgotten corner of the continent – forgotten in the sense of the war in the Congo. How do you make a film about the misery on the streets of Kinshasa, the capital of a country that’s been referred to as the site of the deadliest war since the fall of Adolf Hitler – a war that’s claimed up to 6 million people and whose misery has persisted – and yet fail to contextualize the misery in your film? The UN had labelled the country “the rape capital of the world” as rape has been systematically used as a weapon in a war that was remorseless in its crime against humanity, whose aftermath has left the country impoverished and devastated.

Perhaps, the answer lie in something Alain Gomis said in an interview. “ ‘Félicité’ is not just about the characters but also about what is coming now. The young generation of filmmakers have grown up without ever having gone to the cinema because there are no more cinemas in Africa. In Kinshasa, I felt like I was at the center of the world, this is where it’s happening. There’s an extraordinary energy there.” Quite apart from the false claim of no more cinemas in Africa (cinemas are springing up, almost on a monthly basis in Nigeria), this statement is that of a person who never imagined, while making his film, an African audience. It calls up the conflict of African films, European audience – the struggle to define yourself and your film outside European expectations, or the submission to this expectations. Gomis, it seems, choses submission – the optimism of the last two sentences causes an obfuscation of the truth.

To come back to our European lover of African cinema. When this person really want to enjoy movies as an art, they go to see European films. I’m reminded of a series of debates I had with one such lover: Djo Munga was simply clever with his film Viva Riva!; Nabil Ayouch‘s Much Loved and Mohammed Mouftakir‘s Pegasus were calculated for European audience; Tamer El Said‘s In The Last Days of the City was pretentious. This is a conceited, self-indulgent, condescending attitude. Implicit in this attitude is the notion that style does not become African filmmakers. (It’s, of course, possible I generalize and not all lovers of African cinema have this attitude. I’ll rather, however, that my accusation be viewed as directed, not against this or that person in particular but against the general prevailing anthropological approach.) The search for thematic authenticity leads to the acceptance of corresponding films and filmmakers from Africa as the honest authentic voice of the continent.

Beya said she based her portrayal of Félicité on her own experience and the reality of her city. “I have no background in acting or theater. I managed to do this role because it’s our daily life in Kinshasa. Someone gets ill, they die, you see tragedy. I interpreted this character based on what I see around me. You see these things in the DRC, this happens all the time. It was a difficult experience.” Perhaps, this accounts for the honesty of her portrayal, but how does it account for the film’s treatment of love and sex? Without beauty, without tenderness: just a series of brutal forgotten moments – in a half-exposed corner of a dive bar or on the dirty edge of an unmade bed – torn from a life of squalor and debauchery, so thoughtless in its need it knows neither filth, nor ugliness.

Why is it that, all too often, sex, in African narratives, is linked with violence and conception never with love? The African woman, always, is a ragged struggling woman with a hungry baby on her back. In this Felicité does not disappoint. What is never clear, like so many things in this film, is the meaning of Felicité’s wordless relationship with the son whose predicament serves as the film’s premise. Because the filmmakers also seem unclear about this, the film misses its premise, throws it away midway – the boy, in spite of all the degradation the mother suffers to save his leg, losses it prematurely in the narrative. From this point, the film has nowhere left to go. And, like Felicité’s, night-time walk, it drifts along, without direction, in a half-dream state into a disatisfying love affair.

What exactly is Felicité rebelling against? Are we to accept her as a symbolic representation of the struggles of women in a country referred to as the rape capital of the world? If so, the choices imposed on her by the filmmaker renders her quite inadequate. How do you deal with a character, a woman rebelling against her society without showing that against which she rebels? Gomis’ sudden pursuit of romance in the second-half of his film diverts him from the power of his narrative: the defeat of a strong character forced to settle for that against which she rebels – in the quest to save her son’s leg. Instead of this end – Gomis seems frightened of his film’s premise – we are offered the meaninglessness of what looks like strong woman finally meets the man who can master her. I’m reminded of the character Johnny, played by Brando, in the movie The Wild One – in response to the question, “Hey, Johnny, what are you rebelling against?” Brando’s character answers, deadpan, “Whaddya got?” Felicité, like Johnny, has no idea what she’s rebelling against.

3 thoughts on “Gomis’ Heart Of Darkness”